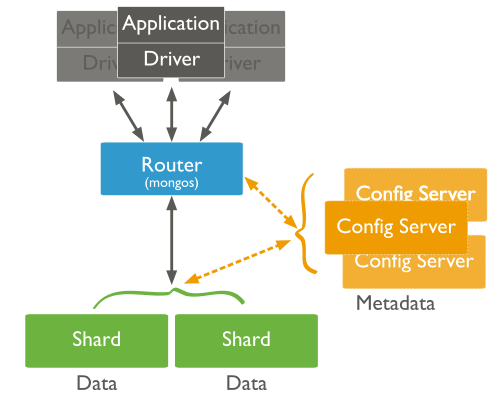 How to deploy a MongoDB cluster (version 3.4)

I worked on a project theses days on a project based on MongoDB. The project was to allow a customer to have have his account history (all transactions he have made) on nearly real time in telco environment. Due to some reasons we have choose to use MongoDB technology and due to the fact that we are talking about terabytes of data a MongoDB Cluster was needed. After digging on internet I successed to do it. ( by the way, the project was a success)

This article will show to you steps I followed to configure my cluster on MongoDB 3.4 during the project. We wanted to have a cluster of three Replica Sets and two routers. For optimization purpose we choosed to have 3 nodes per Replica Set (one primary, one secondary and one arbiter) and to launch all arbiters on the same node due to the fact they are not resources consuming.

We assume that you are working on linux and MongoDB is well installed. If not, consult this link: https://docs.mongodb.com/manual/administration/install-on-linux/

If MongoDB is installed, all nodes need to be configured depending of thier purpose (Replica set, config servers or routers).

Now that everything is configured, let’s start the configuration of the MongoDB Cluster.

To configure it, make connection on a mongo shell on one the nodes and type commands below:

In some case you can setup a arbiter, his purpose is to handle the election between the secondary nodes in case of the unavailability of the primary node. He doesn’t have any data of the Replica Set: it is simply used for the election. In our case, we will have two nodes and on aribiter: one primary, one secondary and on arbiter.

For each Replica Set connect on the mongo shell of each primary node and type the command below:

NB: In our architecture all arbiters are launched on the same node so you need to change the port when you configure your Replica Set. For example here (on rs1 the port is 30000, on rs2 it ca be 30001, …)

In some case you want that to give priority on some node in case of election. So if this node is available during and election of the primary node, it will be privileged.

To do so, just connect on the mongo shell of the primary node and type the command below.

Replica Set and Configs Server are now OK. Let’s put the final piece of our puzzle: let’s put all those elements together.

First of all make sure that mongod service is not started on the server if it is the case stop it then type the command below:

Connect to his mongo client once the mongos is launched and type the commands below:

These are the steps that I used to configure my MongoDB Cluster. Today our MongoDB Cluster have 3 Replica Set (with two nodes and on arbiter) and everything is working good.
Thanks you very much for reading this article.